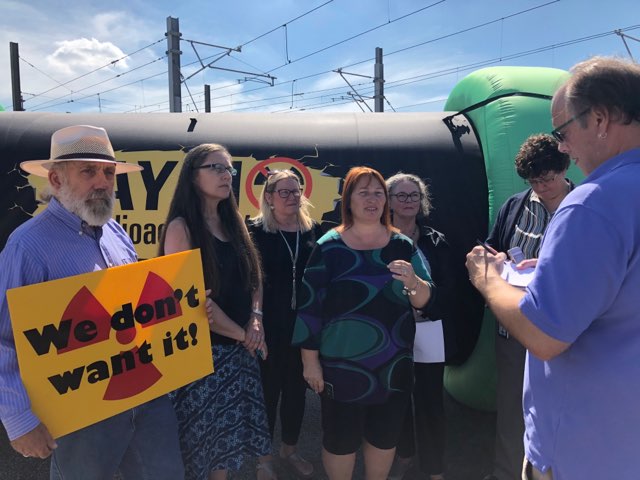 Public Can Speak Out Until Oct. 19th Against Plan to Dump the Most Dangerous of All Radioactive Waste in West Texas; Public Involvement Has Stopped Poorly Designed Waste Dumps in the Past

Dallas,Texas – The public has until October 19th to speak out against the plan to dump the most dangerous radioactive waste in Texas, waste coming from nuclear reactors around the country. A high-risk, high-level radioactive waste dump is proposed in Waste Control Specialists’ re-started license application with the Nuclear Regulatory Commission (NRC). Local community members, Public Citizen, Sustainable Energy & Economic Development (SEED) Coalition and Nuclear Information and Resource Service (NIRS) held a press conference today near railroad tracks to point out the risks of accidents, leaks or terrorist actions if the waste is transported through San Antonio. They noted that the clock has begun ticking for public input, and that public opposition has stopped the siting of radioactive waste dumps in the past. Kerstin Rudek, with Citizen’s Environmental Initiative in Gorleben Germany, spoke about the high-level radioactive waste storage experiences of her community and warned people to fight. Erin Moore read a statement on behalf of Dallas County Commissioner Dr. Theresa Daniel, whose strong resolution on this issue passed unanimously.

Waste Control Specialists (WCS) seeks to bring in by rail 40,000 tons of irradiated fuel rods from nuclear reactors around the country and store it at their existing low-level radioactive waste site stored for 40 years, although the application says that it could be up to 100 years, risking creation of an unsafe de facto permanent disposal facility. This deadly waste must be isolated from people and the environment for a million years. Exposure to radiation can cause cancer, genetic damage and birth defects, and being close to unshielded waste is lethal.

“While not in bomb grade form, a single train car would carry as much plutonium as was in the bomb dropped on Nagasaki. Radioactive waste moving through highly populated cities across the country could be targeted for sabotage by terrorists or could cause catastrophe in the event of an accident” said Tom “Smitty” Smith”, Special Projects Director for Public Citizen. “We don’t need deadly waste coming through the Dallas / Ft. Worth region and West Texas doesn’t need to be targeted as ground zero for the nation’s radioactive waste. People there had nothing to do with generating the nuclear power. Why should our lives be put at risk from the waste?”

“Public health and safety, including protection of over 7 million people in the Dallas/Ft. Worth metroplex should take precedence over the potential profits of a company that wants to bring deadly nuclear reactor waste to Texas,” said Susybelle Gosslee, with the League of Women Voters of Texas. “Rail lines often run close to homes, schools businesses and hospitals, and insurance policies generally don’t cover radiological impacts. An accident with a radiation leak could cause disaster, impacting our health and costing billions of dollars to remediate. The NRC should protect our health and safety and deny the license application.”

“Waste Control Specialists was sold to J.F. Lehman, a private equity firm, in January, 2018 and now NRC appears to be rushing their revised high-level radioactive waste application along. The agency has failed to schedule a single public meeting on the revised application,” said Diane D’Arrigo, Radioactive Waste Project Director with Nuclear Information Resource Service (NIRS). “The NRC held only one meeting in all of Texas on the original application, in February 2017 in Andrews, Texas, over a five-hour drive from San Antonio. By contrast, the NRC hosted five meetings this year in New Mexico for a similar high-level radioactive waste proposal by Holtec for a site near Carlsbad and two dozen for a proposed Nevada dump.”

“At the one meeting held in Andrews, Texas on the old application, back in 2017, the public message was clear “We Don’t Want It!,” said D’Arrigo. “The NRC is trying to keep Texans in the dark on nuclear waste coming through. Texans can and MUST demand meetings in Houston, San Antonio, Dallas/Ft. Worth, El Paso and Midland, where people would be at risk from routine radioactive waste transport and from accidents or unthinkable foul play.”

„Our rural farming community was targeted to take high-level radioactive waste in Gorleben, Germany, and in 2011, we stopped the nuclear industry from bringing transports to our area with protests on the streets and on the railroads with 50,000 people,” said Kerstin Rudek. “We have serious concerns about risks to our health, our water, and our food. There’s been massive opposition, even from conservative people who never took action before. We don’t want the dangerous waste that is being dumped on us. I am here to share our successes and hope that Texans can prevent being dumped on!”

“Mounting opposition to the plan to dump on Texas keeps growing,” said Karen Hadden, Executive Director of the Sustainable Energy and Economic Development (SEED) Coalition. Resolutions against consolidated interim storage and transport of the dangerous waste were passed by Bexar, Dallas, Nueces and Midland Counties and by the City of San Antonio. Oil companies and ranchers are increasingly concerned about the impacts of potential contamination. When people learn about what is proposed, they don’t want it. They want to protect Texas and their families. If this waste is so safe, why not leave it where it is?”

The least risky approach to dealing with high-level radioactive waste would be to keep it at existing reactor sites, or nearby, and use more robust canisters and casks. There’s no need to move the waste anywhere and no need to centralize it, since a permanent repository is not available. Spent nuclear fuel can be kept onsite in dry storage for 60 years after reactors cease operating.

The Protect Texas from Radioactive Waste Tour will go to major cities across the state with an inflatable full-scale mock radioactive waste transport cask and hold press conferences at railroad crossings where the radioactive waste could travel and host community meetings. See www.NoNuclearWaste.org.

The public can comment on the license application until Oct. 19th. Comments on WCS/ ISP’s Consolidated Interim Storage Facility should include Docket ID NRC-2016-0231, and be emailed to WCS_CISF_EIS@nrc.gov. Comment letters can also be sent from www.NoNuclearWaste.org.

The public can also submit requests for a hearing and petition to intervene in the licensing proceedings until October 29th. Information is available on the August 29, 2018 Federal Register

An October 2008 report prepared for the State of Nevada – Potential Consequences of a Successful Sabotage Attack on a Spent Fuel Shipping Container: Updated Analysis Revised Final Version was prepared by Radioactive Waste management Associates (RWMA.) Dr. Martin Resnikoff found that cleanup costs following sabotage events in which casks were penetrated but not perforated, similar to analysis by DOE, could range from $3.5 billion to $45 billion. Transportation sabotage events in which the casks are fully perforated could result in cleanup costs of $463 billion to $648 billion. 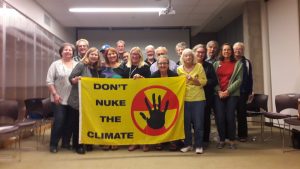 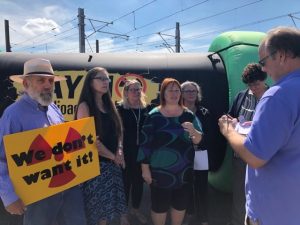